skip to main | skip to sidebar

Women in Combat: A Bad Idea?

An article today details the high number of women who have returned from Iraq and are now suffering from various mental health problems, usually Post-Traumatic Stress Disorder (PTSD). According to the article, there are more women than ever witnessing direct combat. Even though they are not directly in combat, these women soldiers are often right near the fighting in Iraq.

Although I think that these women are extremely brave and I am very grateful to them for volunteering to serve for our country, I have doubts about whether allowing women to be so close to combat is a good idea. It seems that there is a much higher rate of PTSD among women who have served in a war than men. Also, according to this article, many women have also been sexually harassed while in Iraq.

Thus, is it really worth the risks involved to allow women to be so close to direct combat? In an ideal world, any women who wanted to serve in combat would be able to do so. However, in the real world there are many pratical considerations that would seem to point to the conclusion that it is a wiser decision not to allow women to serve so close to the actual fighting.

Some of the problems that arise from allowing women to be in positions close to combat are:

Just like I think we should keep women out of war zones because of the problems that can occur when women are allowed to be close to or in direct combat, I also think that we should be carefully screening male soldiers in order to weed out the ones who are at a high risk for suffering from mental health issues related to the trauma of being in combat.

Again, I am not saying any of this to in any way disparage the service of women in the military. I have the utmost respect for the women who were brave enough to fight for our country. However, I feel that the best decision for the military is to keep women out of war zones.

So, what are some examples of explicit powers given to Congress in the Constitution?

Congress' implicit powers come specifically from the "elastic clause" which states that Congress has the power to "To make all Laws which shall be necessary and proper for carrying into Execution the foregoing Powers, and all other Powers vested by this Constitution in the Government of the United States, or in any Department or Officer thereof."

Basically, this clause makes an allowance for powers that might be necessary for Congress to have but that were not included by the Founding Fathers in the Constitution. An example of Congress using the elastic clause would be Congress' power to raise and support an air force. Obviously, there were no airplanes back when the Founding Fathers drafted the Constitution, but one could reasonably assume that an air force would be a necessity in this day and age in order to protect and defend the nation. Thus, Congress has the implied power to raise and support an air force.

Congress has used this "elastic clause" to justify various expansions of its power. But there is another clause in the Constitution that Congress has been frequently abusing in recent years in order to take more power for itself. This clause is known as the interstate commerce clause.

But how does Congress explain why education and drug regulation are issues of interstate commerce? Congress often uses as justification the assumption that anything that crosses state lines is interstate commerce. Thus, because a public university in one state might enroll students that are from out-of-state, Congress can make rules about public universities. A famous example is when Congress ordered a university in the South to desegregate.

As for drug regulation, Congress argues that because drugs might be trafficked across state lines, drug regulation is a federal issue via the interstate commerce clause of the Constitution.

Obviously, these are overly simplified examples. But the gist of the matter is that over the past 200 years or so, Congress and the federal government in general have been stretching their powers to include more and more things that have absolutely no sane Constitutional justification.

Tomorrow: What do we do about this situation?

Posted by Madeline at 5:04 PM No comments:

Part One: A Brief History of the States' Rights Movement

This is the first part of a three-part series that I will be doing on returning power to state governments.

What’s the history of the states’ rights movement?

How did the federal government gain so much power?

Tomorrow: Part Two – What does the Constitution Actually Say about State vs. Federal Power?

On Tuesday, March 18, the Supreme Court will hear the oral arguments for the D.C. handgun ban case. This ruling could have serious implications for gun restrictions throughout the United States.

Basically, what the case boils down to is whether the Second Amendment and its declaration of the citizenry's right to bear arms applies to all citizens or whether the founding fathers meant for this right to be applied only to militias. Vice President Dick Cheney and many other House Representatives and U.S. Senators, including John McCain and even some Democrats, sent an amicus curiae brief to the Supreme Court asking the Court to uphold the D.C. Appeals Court ruling (this ruling held that the D.C. ban on handguns violates the Second Amendment and thus is unconstitutional).

Another important aspect of the case is whether or not the Constitution can be applied to D.C. According to this Fox News article: "The city’s second argument is that the Second Amendment does not apply to District-specific legislation. It is a curious argument, at least politically, for a government keen on seeking equal representation in Congress."

I also wrote about the D.C. Appeals Court ruling here.
Posted by Madeline at 8:43 PM No comments:

The Disaster Known as the War on Drugs

According to this Drug Control Funding Table from the White House Drug Policy website, the United States spent 13.844 billion dollars in 2007 on drug control. This figure does not include what individual states spent on drug control activities. This figure also doesn't include the indirect costs induced in 2007 due to the "War on Drugs." These indirect costs include the burden on the judicial system due to the arrests, trials, and incarcerations of drug offenders and the reduced efficiency of the national economy as people spend increased time trying to avoid being caught rather than contributing to the economy.

So, why should we legalize drugs?

What are the caveats?

Legalizing drug use would not only save federal and state governments billions of dollars, it would also reduce the burden that is currently placed on our judicial system. More effort could be put into keeping violent offenders off the streets. Although I am most definitely not advocating drug use as a good choice, I believe that it is not worth the economic costs for the government to attempt to severely curtail drug use. 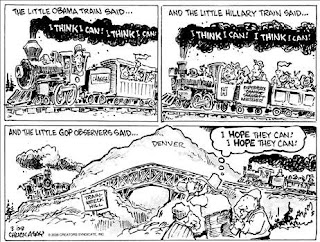 I just love this cartoon I found today on the Townhall website. It so perfectly details my thoughts - and I would guess many other conservatives' thoughts - on the race between Hillary and Obama.
Posted by Madeline at 8:00 PM No comments:

Why Hate Crime Laws are a Bad Idea

CNN tries to make it sound like a hate crime by stating that the family "yelled racial slurs" and also by pointing out that another crew that was filming the attack, a crew that happened to be white, was not attacked.

But even a cursory review of the facts in this case call into serious question any allegations of a hate crime. I suspect that the family would have also reacted violently towards a white reporter had the white reporter been the one on their street filming. Just because the family yelled racial slurs also does not mean the attack was racially motivated. In their fury, the family was probably simply looking for any easy insult that they could throw at the reporter. Also, they were probably too busy attacking the reporter to even go after the crew filming the actual attack.

But, if this had taken place in a state with hate crime laws, the family members could very well have been charged with a hate crime in addition to the assault charges. Hate crime laws provide harsher penalties for crimes that appear to be motivated due to factors like a person's race.

But, as has been said before, correlation does not equal causation. Just because a perpetrator happens to be white and the victim happens to be black and a few racial slurs were yelled in the process does not mean that the crime was racially motivated. Having hate crime statutes makes it far too easy to attach the hate crime label to any crime that involves a minority victim.

Also, as a rule, I think that we should be focusing on punishing the actual crime, not trying to punish the motives behind the crime. Trying to punish motives delves into murky territory as it is very difficult to conclusively prove what a person's mindset is.

Luckily, however, this crime took place in South Carolina, where there are no hate crime laws. So, the attackers are being held on the charges that they should be held for: assault and battery.
Posted by Madeline at 11:48 AM 2 comments: